For the most part, no news is good news.  Billy is still running around the house chasing everything he can get to move, and rasseling with Grace O'Malley.  He isn't quite as weaned as I thought he was, though.  Once or twice a day, he starts following me into the kitchen yelling his head off until I give him some Kitten Glop.  I'm not sure he really needs the glop all that bad, but he likes it, and I still have some.  This way at least he is staying topped up on nutrition.

I keep forgetting he still isn't even two months old yet.

I suspect Grace lost track of Billy last night.  Billy had crawled into bed with me, and was asleep against my neck.  About dawn I woke up to Grace crying and running through the house. I called her, and she came running up on the bed.  She found Billy, and they started rasseling and ran off together.


A couple photos of Billy: 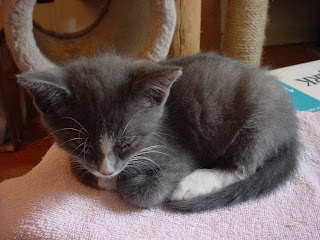 Billy, sleeping a bit after inhaling some Kitten Glop. 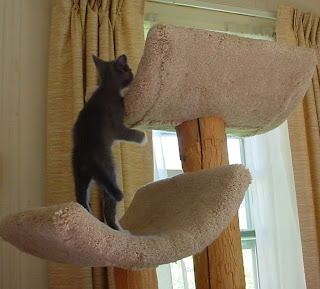 Billy, exploring the top level of the cat tree.
That is usually Anne Bonny's spot, but she wasn't there at the moment.

Finally, Billy in a life and death struggle with a stuffed penguin.  For size, that is the same penguin that was in the box with Billy when he was just a week or so old.

Just for a little variety, this is Grace O'Malley trying to grab the camera strap off my wrist.  About 80% of my photos of her show some variation on this. 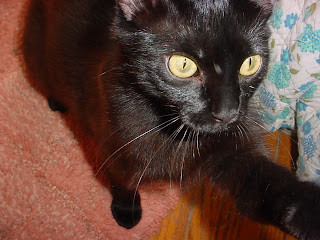 kittens do a slew of growing, of playing and of regenerative sleeping, and thus need a slew of calories. Often they end up eating two or three times the amount an adult cat will. nothing wrong with giving him a few extra meals :)

We love watching Billy play with the penguin.

Billy is such a cute and lively kit. We love him to bits. He even looks abit like Batman.

We wonder what breed of cat is that with the white and black face..

Have a great weekend!

Billy looks so good. He is such a lucky kitteh to haf sumbody like you caring fur him. He's so adorable.

KC and the Giggleman Kitties said...

Billy White Shoes is just absolutely adorable. What a cutie pie!
KC had to post on the CB about him so everyone could fall in love.
Also, great job on the Pet Food Recall List, very easy to navigate.
Love & Purrs,
Mom ML & KC

Alasandra, The Cats and Dogs said...

So nice to see them enjoying their life and playing.

Squeeeee!! What a cutie!!

Aww... what a sweetheart he is!! Thanks for sharing the pictures and video!

omc - he is a cutie - he reminds mom of Silver (who has decided baby jail is not the place for her and woke mom up IN BED this morning by tapping on mom's forehead....). :)

Thank you so much for stopping by to say hi on my Gotcha day, we look forward to learning more about you all.
Madi and mom

Thank you so much for your visit.
We haven't met but I have to say that you're quite an handsome little kitten Billy!

Billy is the cutest little guy, and who knew he could party? Thank all of you for coming to my party and helping to make it a success! It was great to see you there. I hope you had as much fun as I did!

The Furries of Whisppy said...

That video of Billy's battle with the Penguin made Mommy laugh!
Thank you for your purrs and prayers for our dear Tutu. We know they definitely helped!

Keep upp the good work!!! Heartwarming reading about the news!

Billy is a real cutie. Thank you so much for your kind words of comfort that you left at the Rosehaven Cottage blog. We appreciate them so much during this time of grief.

Billy is so darn cute and he is growing. Glad he is doing well. Also glad to hear he has learned to snuggle with Mom. Take care.

Cute! And thx for the purrs.

Thanks fur taking in the little scrap. What a kyooty. Our Buttons was all full of vinegar like he is and drug all kinds of toys around.