For Mothers Day -- the Little Momma

Last summer I kept the back door open a crack so my kitties could get in whenever they wanted.  That, coupled with the food and water I kept out, started attracting other critters.

One of them was a tabby girl I started calling Little Momma, mostly because she had two kittens with her, and wasn't a whole lot bigger than the kittens she was raising.  Little Momma wouldn't let me get close to her, or her kittens.  But she wasn't bashful about using the supplies I set out for the crew. 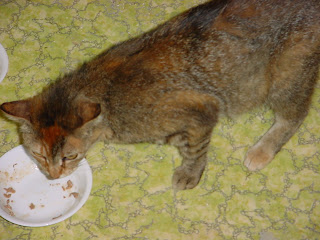 The Little Momma, finishing someone's breakfast
in the kitchen.

Little Momma taught her kittens to use the Clowder's litter boxes and eat their food.  But the Clowder finally got their revenge, sort of.  Little Momma's kittens started playing with Grace O'Malley and Billy White Shoes, and eventually both of them moved inside. 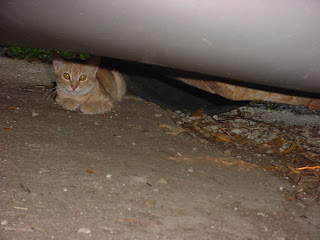 One of the first photos of Little Momma's boy kitten.
He's staying under the far side of the car, just in case.
And a totally gratuitous video of Billy White Shoes as a little kitten.  I thought I had lost it, but I found it the other day.  Enjoy.

Watch Billy's ears.
They don't show up as well as I'd hoped, but they do wiggle.

May the Fourth Be With You

Stolen from Star Wars Cats.
(If I ever find who did it, I'll add a credit)


Jedi Kittens Strike Back
or watch at http://youtu.be/4Z3r9X8OahA

For more cats and Star Wars, check out http://www.buzzfeed.com/modcatlove/cats-and-star-wars-2n09, or try your favorite search engine.

And May The Fourth Be With You.