Billy White Shoes is starting to enter the kitten monster stage.  In the last couple days he has knocked over my water glass twice, drunk from it three times that I caught him, and pushed my track ball off the computer table five or six times, just so he could watch the ball roll around the floor.  That doesn't count all the things I find on the floor when I get up in the morning.

He's also has taken over the top perch in the cat tree.

Billy and Grace O'Malley still play together, but I seldom see them cuddling together when they sleep.  Billy keeps trying to play with Anne Bonny, but Annie just swats him until he runs off. 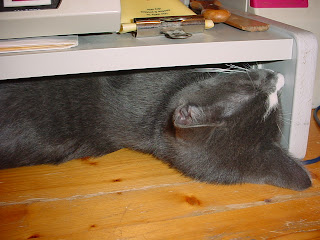 Billy still fits under the keyboard tray, if he works at it.  It's hard to remember that not too long ago, he could just walk under there, and didn't even have to duck very much. 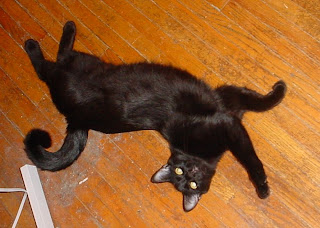 A rare photo of Grace O'Malley not trying to grab the camera strap.

Billy White Shoes is getting bigger

At the rate he is growing, 'little' Billy White Shoes is going to be the biggest kittie in the Clowder pretty soon.  He is already almost as tall as Grace O'Malley, and might actually be a little taller than Anne Bonny.  He is still skinny as all get out, but filling out is just a matter of time.  Billy's still just a bit over four months old.

Billy gave me a bit of a scare the other night.  There is a little gas station/convenience store about a block away.  Billy decided to follow me there, but he was gone when I came back out.  About half an hour later, Billy was back by the back door, trying to decide whether a raccoon family eating some of the cat food was a playmate or not.  I may need try him with a harness, see if I can take him for walks.  At least, I'll have to remember to look around for Billy before I take a walk anywhere. 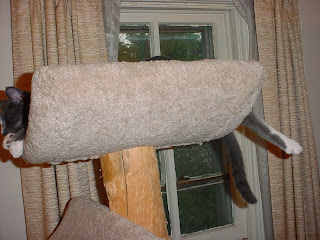 Billy has pretty much taken over the top perch in the cat tree.  Anne Bonny won't stay there even when I put her up there. 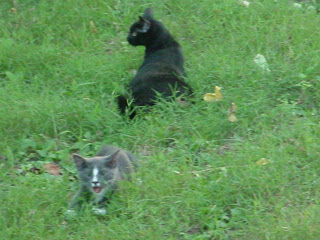 Billy and Gracie playing in the yard.  It was like 98°F (37°C) out there that day.  If you look close, you can see Billy panting like he's about to collapse, and he was still pouncing on Gracie, climbing trees, and running around like his tail was on fire.

Everyone is still hanging in there

Mostly an update to tell everyone nothing much has changed.  We were off-line for a couple weeks (long story), but things are more or less under control again.

Billy White Shoes doing fine, although a couple of his favorite hidey-holes are starting to get a little small for him.

For example, I have the monitor on a keyboard storage shelf, and Billy likes to hide under there, and swat at the mouse.  He still fits in there, but he has to work at it now. 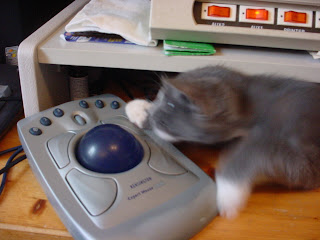 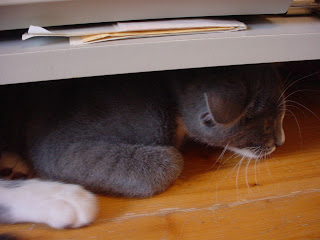 Weather this week has been hot, with highs around 95°F (35°C) or so.  But all the kitties insist on spending most of the day outside, anyway.

A quick video, showing Billy White Shoes & Grace O'Malley trading bowls a few mornings ago.  They do that almost every morning.