and on a somewhat lighter note...

Just when you think Menu Food's has reached rock bottom, they grab themselves a chisel and break through to another, deeper sewer.

Court: Menu Foods harassed pet owners
The pet food company that recalled 60 million cans of contaminated dog and cat food repeatedly made harassing phone calls to pet owners who had lawyers and said they didn't want to talk, even after a judge ordered the firm to leave them alone, court records show.

Lawyers from six firms representing clients who claim their pets were harmed by Menu's pet food asked a federal judge in New Jersey Wednesday to stop Menu from "bullying" people who had called the company since the recall was announced March 16, according to their court filing.

U.S. District Judge Noel Hillman in Camden, N.J., agreed with the plaintiffs, describing the calls as "aggressive," according to a transcript of the hearing obtained by USA TODAY.

"It's one thing for two people to sit down at the table and voluntarily agree to settle their case. It's another thing to harass people on weekends through automated phone calls," Hillman said to Edward Ruff of Pretzel & Stouffer, Menu's lawyer. 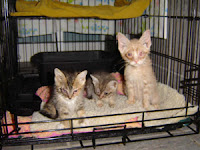 Anyone out there in the Cincinnati, OH, area? If you are, and have room & time to foster a kittie or three, shelters out there have a bunch of kitties that need help. Apparently, Pet Alliance, Save Our Strays, and Silver Bells Rescue stumbled into a house full of abandoned kitties.

Some sub-human got evicted, and just walked away without even telling anyone there were sixty kitties in the house. More information here and here.

It's strange how time flies when you're checking recall notices.

Hi. This is the Food Source.

I did not realize how long it had been since we had posted. I've spent most of my on-line time checking food recall notices and reading dozens of other cat blogs. With luck someone will be able to post something related to the clowder later this week.

In the mean time, a picture from a glorious site I found recently. Enjoy. 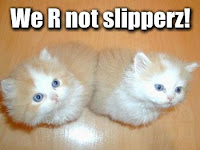