That isn't Billy in that LOLCat, of course, but he is starting to have the same attitude.  The other day he was trying to rassle with Grace O'Malley.  Gracie was about half way between 'Oh, yeah, bring it on' and 'HUH?'.

I'm not sure how much progress I'm making on getting Billy White Shoes weaned or box trained, though.  If I put some Kitten Glop on my finger, I can get Billy to lick it off once in a while.  But most of the time he swats my hand away and ignores me.  I haven't gotten Billy to have much of anything to do with the little litter box I put together for him, but he keeps heading to the kitchen with the 'big kitties' box.  I keep finding little puddles in the area, so I kind of suspect he is trying to go where the other cats are going, and is just too small to make it into that box.  I'm about to track down a couple bricks to give Billy some steps up there, and see how that works.

In other news, Grace O'Malley got her stitches out Friday.  She didn't appreciate being stuffed in the PTU, or being held that tight, but otherwise she didn't seem bothered much at all by the process.  The only thing left is for the fur to grow back, and that is coming along fine. 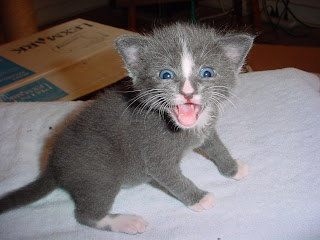 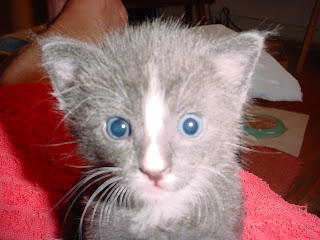 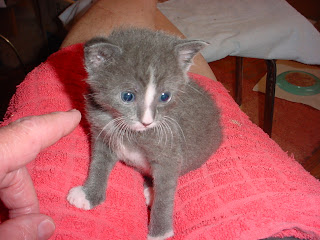 In that last photo, I heard Billy yelling and struggling, so I went and checked on them.  Gracie was sitting/laying on Billy's chest, and Billy was fighting to get out from under.  When they saw me, the both stopped, and looked at me like 'Well?  What do you want?  We're fine!'.

Oh too funny. He is too cute. Maybe you could also put a little ramp up to the litter box. He just wants to be a big kitty. Kittens are the best, aren't they. Enjoy while you can. Take care.

We remember Georgia and Gemini doing that. Gemini used to be upside down and bunny kicking at Georgia and Georgia would hold her down and Gemini would be screaming at the top of her lungs. Georgia sat there and looked bored...

I am in love with that kittie... Beyond cute!

He's adorable! We think he'll be comin around to eating soon. He's still so tiny. SQUEE!

Oh I am fully aware that my mommy is t-totally in love with you Billy! But that is ok. She loves me too.

OMC! That Billy is a cutie-patootie!

I had one kitty who would not wean until she was seven weeks.. so don't take it as a failure on your part that he's not where you want him to be, realize it is just part of his life plan :)

What a cutie he is! When we had kittens, the mom put out a little aluminum baking pan for a kitten litter box. They come in all sizes, are just a couple bucks at the grocery store and are disposable. The momma cat went in it once and magically the kitten were toilet trained. They would decide they had to all go at the same time and would line up and wait their turn.

omc - that last picture is adorable!!! mom uses the boxes canned food comes in for baby litter boxes....just make sure to use clay in case he decides to taste test the litter. :) Silver is still determined not to eat kitten food either....

Adoreable. The first litterboxes I used for my were: a shoebox (low sides) lined with plastic bag, then papper and then cat litter. This one I used at work.

At home I used a clay ovendish also lined first with newspaper and then cat litter.

Another thing to try is to put some dirt from the big kitty box in the kitten box to give him the idea.