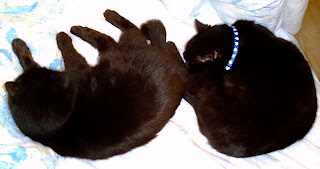 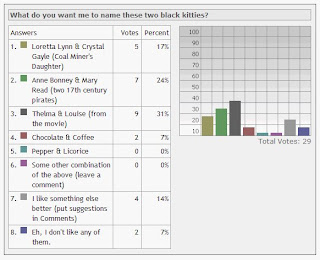 How about Oprah and Gail?

The Misadventures Of Me said...

Hehe Cats are like potato chips, you can't just has one! hehehehehe The kittys won again!

Thank you so much for coming to our blogoversary party and celebrate with us! It wouldn't have been as much fun without you - and we hope you had a great time too and not too much of a hang-over, hahahahahahahahahahahahahahaha!!!!
Karl

congratulations on your new kitties! they are lovely. i like Thelma and Louise very much :)

We bet there are a lotta "Thelma & Louise" in the world, but mebbe NO Anne Bonney & Mary Read! We think that is a GREAT pair of names. An think would ya could do wif the Purrageous Pirates Captain Jack & Dante!

Sorry to hear your blogging templates are giving you trouble. It's definitely frustrating. Our mom wants to change ours too, but afraid to ruin something by accident.

Congratulations. We are so glad these kitties found a good home! Thank you so much for stopping by our blog and sending your well wishes to Orange Boy. He is still fighting, but he made it through another night!

My Mommie knows someone with two very adorable black cats that are sisters and their names are Sugar and Spice!

Just stopping by to say hi and thank you once again!

Hey!
Thanks for dropping by with Purrday wishes for Mel.
Mugsy is a hefty 10 pound kitty now (at only 9 months of age)!
If you want a foregin language/internaitonal flare...
Preta is the feminie form for black in Portuguese and Lillith is the Hebrew word for darkness.
Also, Hokus and Pokus are fun "bewitching" names.
That's all I got for now

I think all of these names are worthy of consideration. You may want to consider getting them my scathingly funny book, The World Is Your Litter Box, which is in bookstores now and is also available on Amazon. The book is cleverly disguised as a cute cat book so humans will buy it, but is, in fact, a how-to manual FOR cats. Check it out on my website, www.theworldisyourlitterbox.com

BTW,
Thanks for getting us hooked up with Catblogsphere!
Way cool!
M~n~M

oh HAI! We like chocolate and coffee for ur names, because ALL FOOD IS GOOD. heehee

Thelma and Louise--dat's good, too. Hard to say "th" with big teeth and whiskers!

Thanks for stopping by our blog. We added our new friends to our blogroll!