I Fear the Word is Getting Out

You know, it is bad enough when the human neighbors figure out that they can probably hand me the stray cat they find, and get me to take care of it.  But it is starting to look like the cat neighbors are starting to figure that out, too.

Sunday morning I was out refilling the supplies for the outside kitties, and I started hearing a kittie crying.  After I called out a few times, a little kitten came crawling out of one of the shelters I keep in the area, still crying for all he(?) was worth.  I looked around and couldn't see any momma cat, or even any more kittens.  He wouldn't let me catch him, so I finally left him go, rather than chase him totally out of his territory.  I left the back door open a crack, and figured he would come inside or not.

He came inside about half an hour later, and eventually found the food and water.  He set to like he hadn't seen food in a while, then hid himself away for a nap. 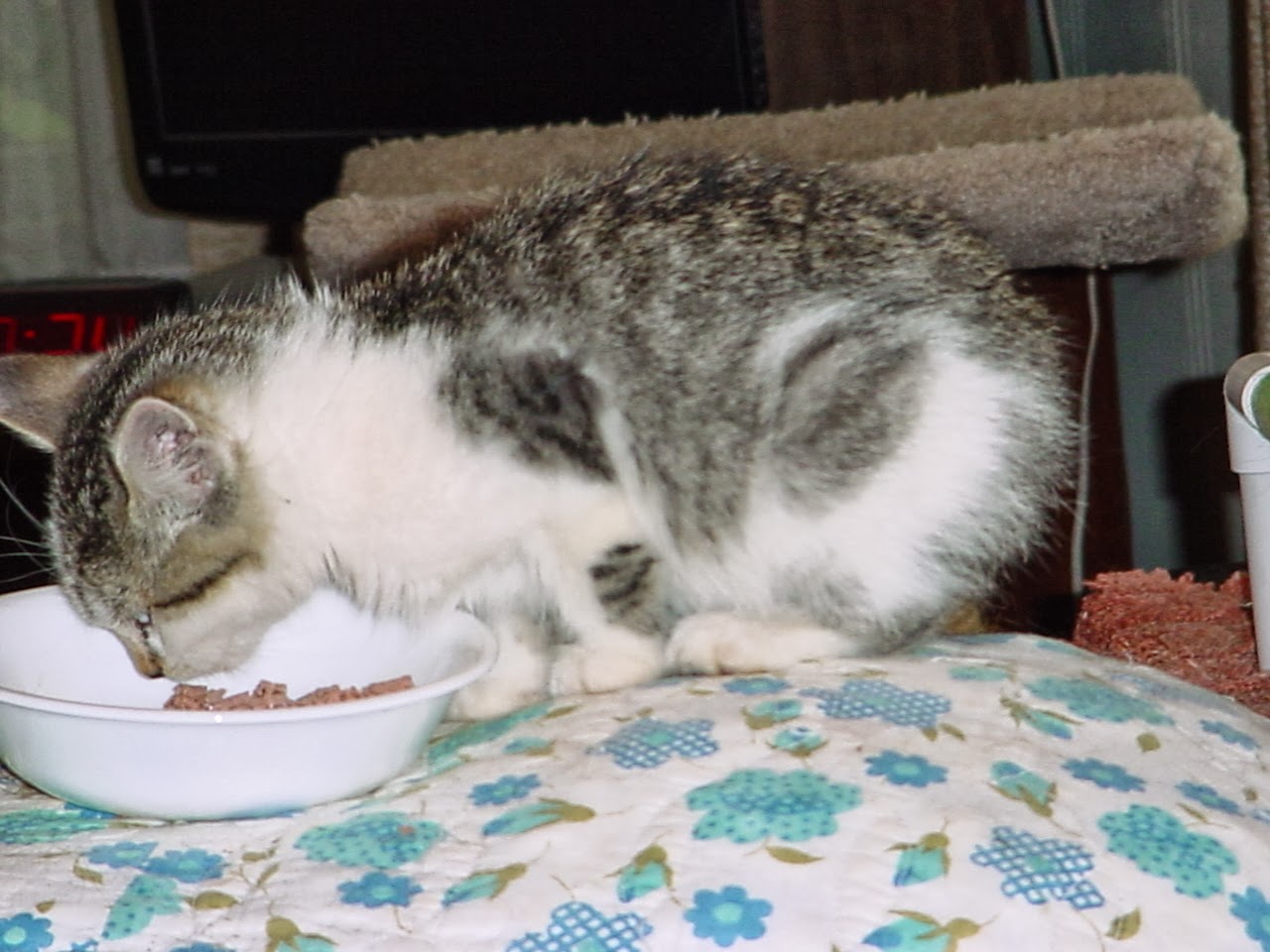 By Monday, he was starting to figure I wasn't going to eat him, and that cuddling with me might not be all that bad a thing after all.  Now, he is starting to turn into a lap cat, although he still hasn't been confident enough to take a nap in my lap.

I'm going to have to check around, and see if I've stolen someone's new kitten, or if he really is a feral kittie. 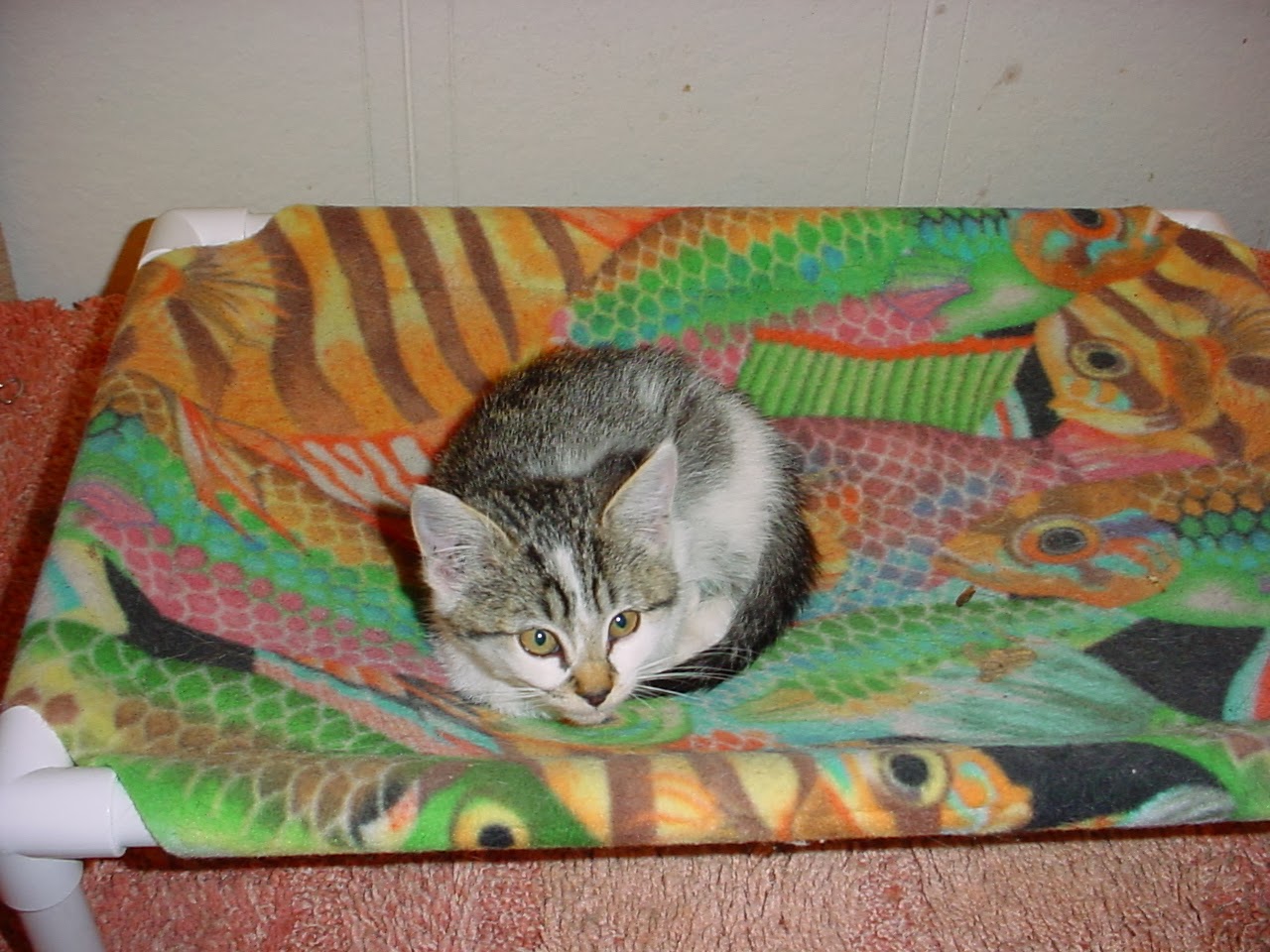 The current crew is not at all sure they approve, although reactions are mostly limited to grrrrrrsss and an occasional head thwopp.

Anne Bonney on the left

PS: Another, older kittie came by a couple times late Sunday and early Monday.   I've seen this cat around a few times, but she will not let me get close to her.  This kittie looks a little like the new kitten, and was crying and looking around Sunday evening when she first showed up, so that might well have been the momma cat.

I thought about showing the kitten to this cat, to see what happened.  But the kitten had hid himself away somewhere, so I just let things go as they were.  If that was the momma cat, I hope someday to be able to tell her that her kitten is safe and warm, and doing fine.

Posted by The Lee County Clowder at Tuesday, October 08, 2013 41 comments: Links to this post

Dig out the jackets

How about this weather forecast? 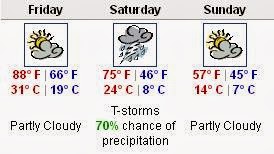 The kitties and I will both mostly stay inside the next day or two, looks like.
Posted by The Lee County Clowder at Friday, October 04, 2013 5 comments: Links to this post

Updating the kitten status.  I didn't realize it I left things hanging so long.

After the first three disappeared, I started taking the last two into the house in the evening whether Calleigh was around or not.  She was a decent mother kittie, but obviously had trouble defending against whatever grabbed those kittens.

For about a week, that went fine.  Then one day I was a little late collecting the kittens.  It was about dusk when I went down to the utility room.  The black & white kitten was already in there playing.  When I went out the back door, the orange kitten was lying dead a few feet from the back door.  Something had grabbed him around the chest/throat, and scraped most of the hair off of his chest, probably when he tried to fight free.  Still have no idea what it was doing this.

At that point, I grabbed that last kitten, and relocated him to the spare bedroom.  He's still there, though he seems to be wanting outside just a little bit recently.  Calleigh will come into the house and spent the night with him most evenings.  Once everyone is a bit bigger and stronger, I'll think about letting little Squeek outside again.

So something got four of Calleigh's five kittens.

Sorry to have to bring such bad news, but I thought you would want to know.

Posted by The Lee County Clowder at Monday, September 09, 2013 9 comments: Links to this post

It looks like something has grabbed those three missing kittens.  I haven't seen any sign of them for several days now.  Maybe worse, some of the older stray/ferals that had been coming by to eat haven't shown up in a while.  There is a vacant lot and a patch of woods across the street.  Those woods are mostly surrounded by fields and pastures, so who knows what could be running around over there.

About all I can do is keep the last two kittens inside at night, and try to ensure the older kitties have a safe place to hide if they need to.

On the good side, Calleigh is getting more comfortable being around me while she's inside.  With luck, I'll get to pick her up and take her to the vet sometime soon.  The remaining two kittens are getting around better, and are eating solid food, although they still hit the milk bar when it's open.
Posted by The Lee County Clowder at Monday, August 05, 2013 18 comments: Links to this post

Starting to worry a little

Just a quick note. The little kittens had been running around, climbing up the stairs and eating great.

But for the last day or so, I've only seen two of them -- the orange boy(?) and one of the black and white ones.  Not sure if the others are hiding somewhere, or something has happened to them.

There has been a family of raccoons running around the last few days, eating the cat food and bird food.  The kittens were running around with the raccoon babies, and everyone was pretty much ignoring everyone while I was watching.  Not sure if they would attack kittens or not.

Momma Calleigh doesn't seem upset, but she is a new mother (less than a year old) so I'm not sure how she would react if something went wrong.

Posted by The Lee County Clowder at Thursday, August 01, 2013 12 comments: Links to this post

Do you remember Little Momma?  After she and the kittens Bobby & Little Dots parted way, she disappeared for a while.  Then Little Momma reappeared with another group of kittens.

Those kittens grew up over the winter, so we never got much chance to socialize them.  Momma had five kittens, and three of them are still hanging around pretty regular.  But there was only one of them that we could touch or cuddle with.

We're calling him Horatio.  It is about fifty-fifty whether we decide to keep him, or find him a different, furrever home.  It depends mostly on whether we can or not.  More on him in another post.

On to what most of you are really interested in: 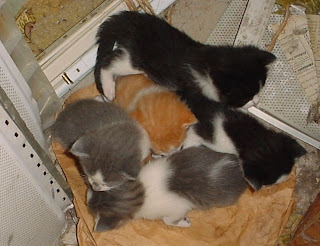 Little Momma seems to mostly have boy kittens for some reason.  The litter from last Fall had only one girl kitten.  Calleigh (she was a calico) would let us get close to her, but never, quite touch her.  But she kept sneaking into the utility room.  Eventually, we found out why.

She had sneaked in there to have her kittens, way in the back where no one could get to her.

Best guess is they are about 4-6 weeks old, maybe a bit older.  They are just starting to run around and climb up and down steps.  The one at the bottom of this photo is the kitten asleep on my arm in yesterdays photo.

A shot of the proud mom.  I tried to get her to look at the camera, but she seems to be a bit shy. 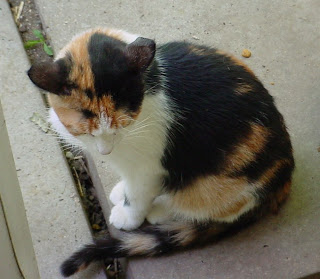 One last photo, all five of the kittens, on one of their first excursions outside. 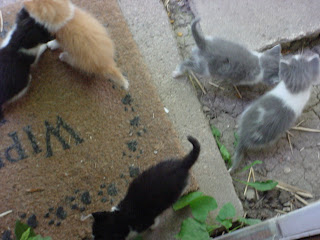 More info in a day or two.

Posted by The Lee County Clowder at Thursday, July 25, 2013 8 comments: Links to this post